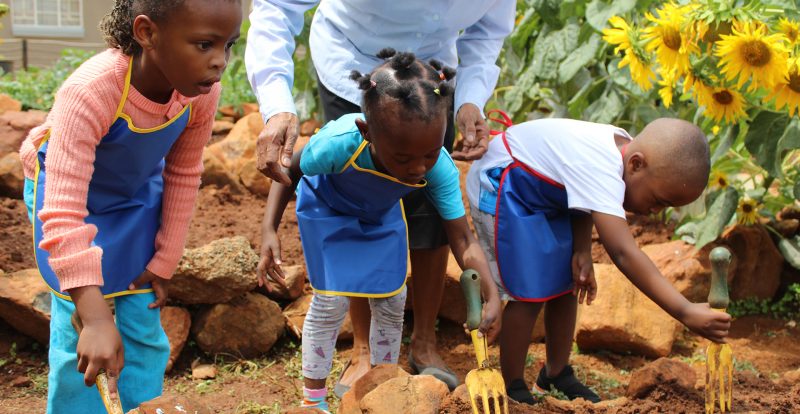 We have all heard that being outside in the fresh air has amazing health benefits for people of all ages. We have also heard that planting flowers or veggies can be therapeutic.

But did you know that gardening has amazing developmental benefits for kids?

School gardens are a wonderful way to use the outdoor space as a classroom, and connect students with the natural world and the true source of their food. Taking children out into the garden and teaching them how to grow their own food engages all of their senses and allows for so many additional learnings opportunities which may include:

This was one of the main reasons Steve Jacobson and his sister Val Mardon chose this wonderful programme and campaign to honour the memory of their dear sister, Sandi Jacobson, aka Millie Khumalo.

Val and Steve worked with Afrika Tikkun to craft a program that would improve the lives and prospects of very young South Africans. They were proud to sponsor Sandi’s primary passions: growing vegetables and growing young minds and bodies. The target of £21 500 / ZAR 350 000 was set to  support the: “From the Garden to the Kindergarten” programme” for one year, in Sandi’s name at the Orange Farm Afrika Tikkun Centre.

As many of you may know, Sandi Jacobson, aka Millie Khumalo, was born in the coastal city of Durban, South Africa in 1957. There was never much that was conventional about Sandi. At 18, she was living in a village called Sekonyela in the Maluti Mountains of Lesotho, working with the local community. It was there that she developed skills in, and a passion for growing vegetables. She honed these skills and a few years later, living in Lesotho’s capital, Maseru, published a booklet called “Grow-holes”. This text was then included in the Lesotho high school curriculum.

Her pacifist philosophy was fundamentally challenged in the early 1980’s when a number of her close friends in Lesotho were executed by SADF commandos. She joined Umkhonto we Sizwe, the military arm of the ANC and operated in exile till mid-1991.

Apart from vegetable-growing and her core convictions on social justice, her other passion was children. She spent five years working in early childhood development, which included three years on site, working to create a sustainable Educare Centre in Jane Furse (Sekhukhuneland, Northern Province).

At the age of forty, she finally decided to do something for herself and bought a small organic veggie farm with her husband, Winston and a friend, Steve.

Devastatingly, her joy of working with the soil again was short-lived when she was murdered on 31 October 1997.

A very warm thank you to everyone who has contributed to making the Garden to Kindergarten programme possible through your generous donations. Thanks to the success of this campaign we shall be going live with our new gardening programme for the grade R children of Orange farm this spring.

The official launch of the programme will be held at our Arekopaneng Orange Farm centre on the 28th November 2018.